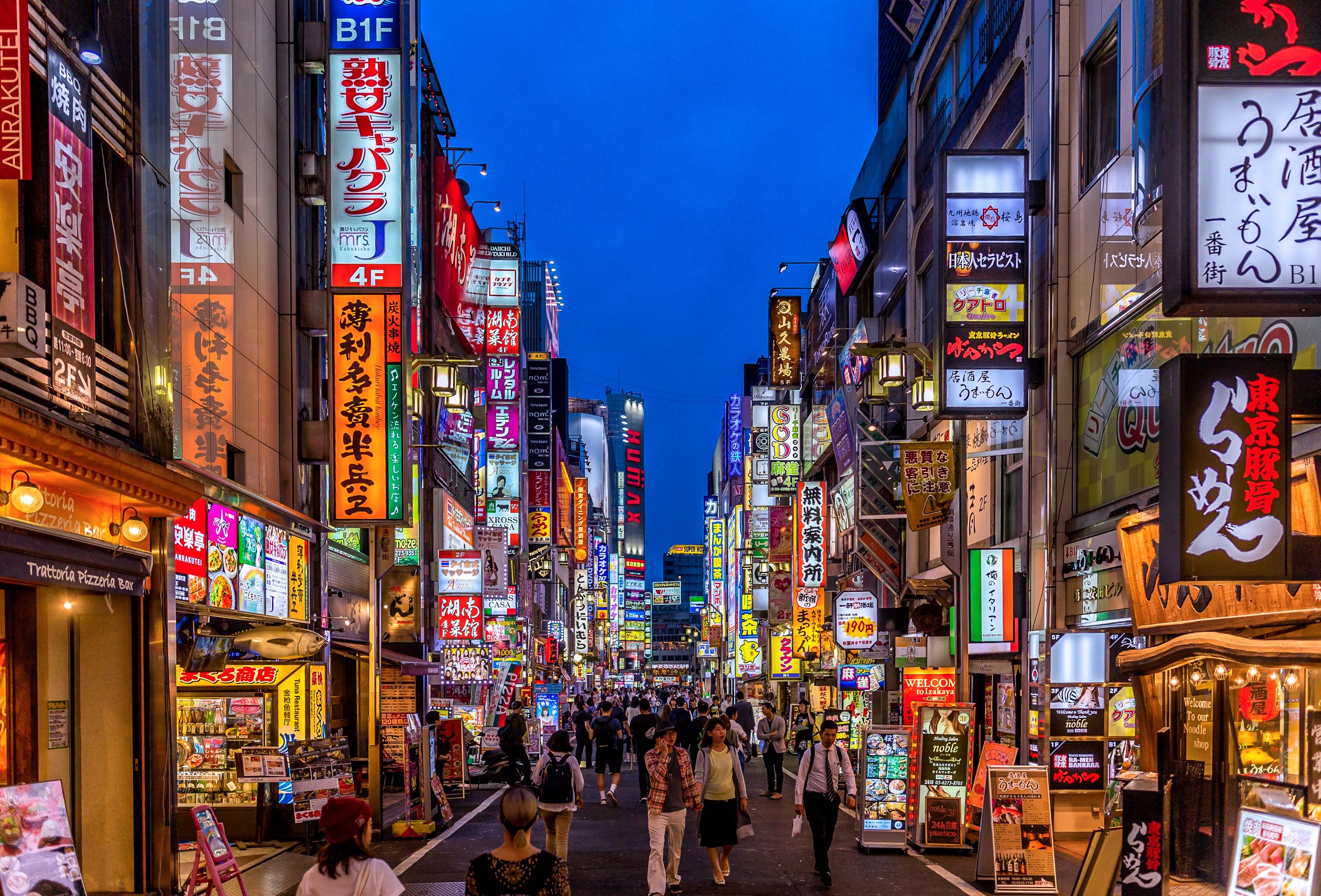 Tokyo is one of our favourite cities in the world – the light, the sounds, the people and the food make it a must-visit global destination. If you’ve got a trip to Japan in your travel plans it is likely to begin in the country’s capital. From where to stay and what to do, find out what’s new in Tokyo.

And once you have visited the city? See some tips and ideas for where to go within easy reach of this buzzing and inspiring metropolis to experience outdoor adventure, local culture, art, and delicious regional food.

Located near the waterfront within the aptly named ‘WATERS Takeshiba Precinct’, Mesm Tokyo brings authentic Japanese design and hospitality combined to make for the ideal choice for travellers seeking innovation and creativity. On the other side of town in the heart of Shinjuku, Kimpton Shinjuku is a sophisticated boutique hotel offering an edgy ambience, stellar city views and seamless service.

In Toranomon, Tokyo EDITION features 206 guest rooms including 22 suites with iconic views of the Tokyo skyline. The hotel includes 3 restaurants with an outdoor terrace overlooking Tokyo Tower and its new Gold Bar offers prime people-watching and a drinks list that pays homage to the pre-Prohibition golden age of tipples.

Hot on the food scene

The Michelin Guide Tokyo 2022 has just been released and includes 432 restaurants in the metropolis. While that may be way more than you can fit in a 48 hours trip to Tokyo, here are some food detsinations to add to the top of your list.

Maz Tokyo, led by Santiago Fernandez, explores Peru’s food culture in inventive combinations while star chef Daniel Calvert is in the kitchen at Sezanne, situated in an art-filled space inside the Four Seasons, Marunouchi.

Tokyo has always been known for its creativity and art. Launched by teamLab, ‘Planets Tokyo’ sees guests walk through water installations or take in the scents of 13,000 real orchids that ‘react’ by making space for visitors to walk around (incredible!). Michelin-starred restaurant Vegan Ramen UZU Tokyo has also opened on site.

For a slice of Olympic history, visitors can now explore the Japan National Stadium, the tour lets visitors explore various parts of the Tokyo Olympic Stadium at leisure. Meanwhile for Disney fans, the beloved Tokyo Disneyland and DisneySea is offering a 20 percent discount on one-day park tickets with fixed-date admission until January 31, 2023.

Get out of the city

In less than 2 hours from Tokyo by express train, you could be in the scenic foothills of Mt Fuji – also known as Japan’s wine country. In Yamanashi Prefecture, you’ll discover rolling hills, sprawling vineyards, and welcoming cellar doors to rival any other well-known wine region around the world.

The region is specifically known for its native grape, the koshu varietal, with some of the wineries in the area, including the popular Risonare Yatsugatake Wine Resort, offering luxury overnight accommodation and winery tours.

Yamanashi Prefecture is also known for its locally grown produce and its many outdoor activities including hiking, camping, and hot springs. Meanwhile Mt Fuji and the picturesque Fuji Five Lakes are a huge drawcard for visitors.

With frequent shinkansen services connecting much of the Hokuriku-Shinetsu region with Tokyo in under two and a half hours, you can’t miss the opportunity to explore the Japan Alps. Including Nagano and Niigata Prefectures, the west coast region is known for its sky-piercing mountains which attract skiers and snowboarders from all over the world.

At the same time, the region’s many towns and cities including the coastal capital of Kanazawa are recognised for their thriving arts, food, and cultural scenes. Enjoying plenty of fresh seafood, local sake, and marvelling at ancient crafts are a must in the region alongside admiring the incredible architecture and idyllic rural surrounds.

Positioned in the centre of Japan and surrounded by mountains and volcanoes, Gunma Prefecture is a mecca for outdoor adventure. Accessible from Tokyo in approximately 50 minutes, which makes it a great location for a day trip if you don’t have time for an overnight stay, visitors can enjoy scenic natural hot springs including the historical Ikaho and Kusatsu hot springs, mountain hiking or more thrilling pursuits like rafting, canyoning or canoeing in the rivers and gorges.

Depending on where you visit, much of Japan’s Tohoku region can be reached by Shinkansen from Tokyo in under three hours. With six prefectures including Aomori, Akita, Iwate, Yamagata, Miyagi, and Fukushima, the region is ideal for both summer and winter activities offering scenic mountains and gorges, rivers and waterfalls, vibrant cities and beautiful towns and villages steeped in history and culture.

Popular highlights of Tohoku include the rocky coastline and islets of Iwate and Miyagi, the mesmerising volcanic craters of Zao between Miyagi and Yamagata Prefectures, and the temples, shrines, castles, colourful festivals, and hot springs of Aomori.

Conveniently connected to Tokyo by shinkansen in around one hour, Shizuoka Prefecture offers mountainous landscapes and lush forests in abundance and is also known for its sprawling tea plantations which produce much of Japan’s green tea.

Made up of volcanic foothills which stretch from Mt Fuji to the coast, Shizuoka is the ideal place to enjoy spectacular views of Mt Fuji, top class onsen resorts, temples, and to explore the beaches and rugged coastline of Izu Peninsula. With their picturesque harboursides, the seaside onsen resort towns of Atami and Ito are a must-see for visitors to Shizuoka.

Must-have travel passes in Tokyo and beyond

Where you can go

The Japan Rail Pass is arguably the rail pass granddaddy, offering unlimited rides on almost all JR trains and shinkansen across the country. But if you’re only staying close to Tokyo, the JR East Tokyo Wide Pass can offer a better value alternative and allows you to visit nearby Nikko, Izu, Karuizawa, Kawaguchiko, the Mt Fuji area (and more) using the three-day train and shinkansen pass.

Similarly, the JR East Nagano Niigata Area Pass gets you to the top destinations in Nagano and Niigata Prefectures including Matsumoto, Karuizawa and Tokamachi. You’ll also be able to visit popular ski resorts like Hakuba, Echigo-Yuzawa and Nozawa Onsen.

If you’re unsure of your plans there are several reloadable smart cards allowing you to tap on and tap off at nearly any public transport in major cities, and many regional areas (often with a discount compared to the cash fare). In Tokyo, the main options are SUICA and PASMO. Each card starts from 1000 yen, which includes a refundable 500 yen deposit and 500 yen of credit.

Aside from the popular rail passes, there are also a number of other discount passes that could save you money. Starting from 6,800 yen for a 2-day pass, THE TOKYO PASS gets you entry to over 35 of Japan’s leading museums, parks, gardens, zoos, and aquariums, as well as all unlimited rides on Tokyo’s subway.