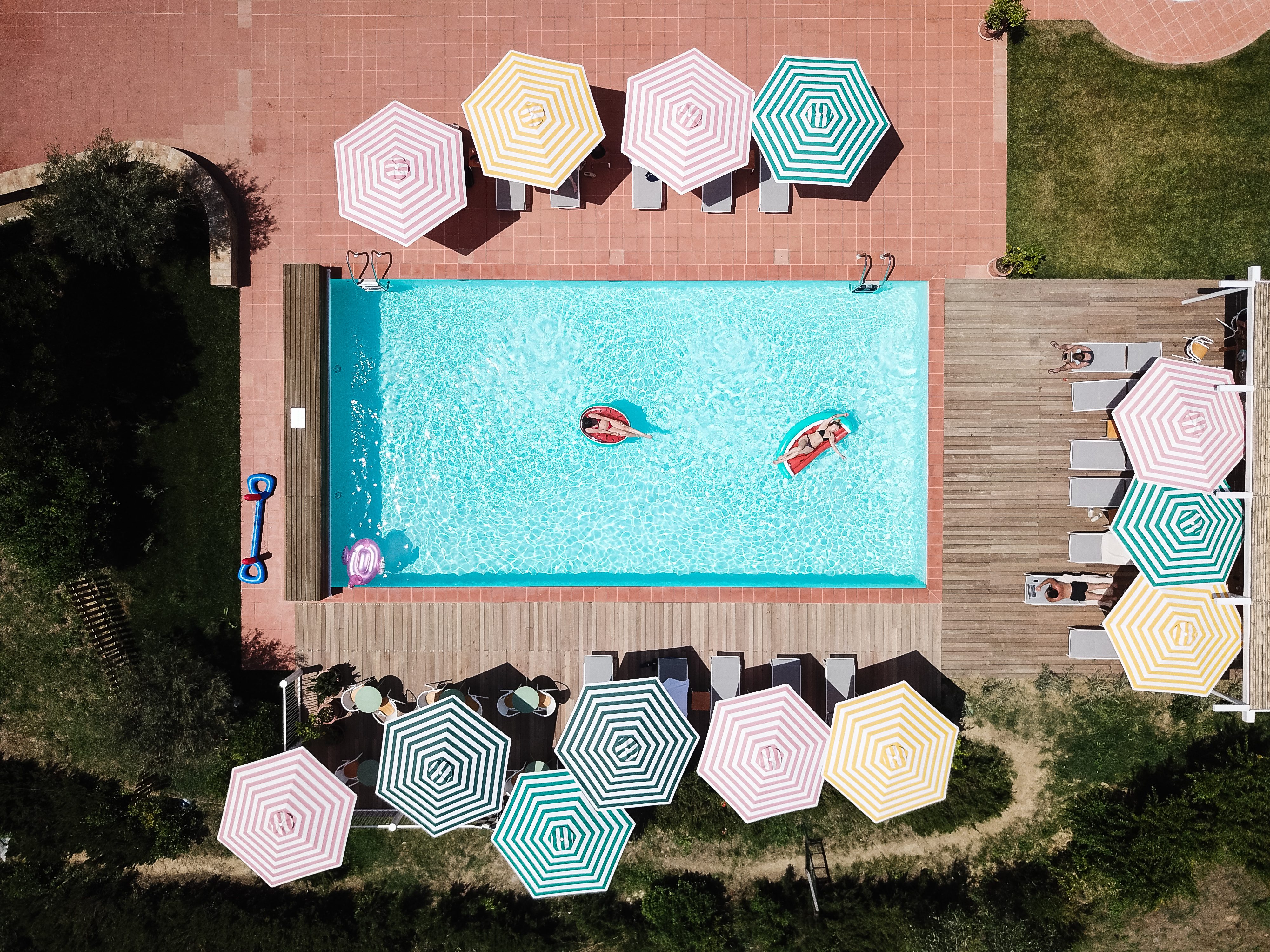 Dreaming about an escape to the Tuscan countryside? Villa Lena should be on your Italian dream holiday list.

Situated amongst the rolling hills of Toiana in rural Tuscany, Villa Lena is a creative residence, hotel and holiday destination that celebrates local Tuscan history, culture and food within an environment that offers international artists, writers, designers, filmmakers, musicians, chefs and agricultural experts’ space to explore and refine their respective crafts.

Set across 500 hectares of woodland, vineyards, olive groves and organic vegetable gardens the 19th-century villa sits at the heart of the property, which was originally built for an Italian aristocratic family. The property now also houses the Villa Lena Foundation and artist-in-residence program.

The History of Villa Lena

Villa Lena dates back to the 8th-6th century BC, and was an important Etruscan site before becoming of major importance for Roman colonies. The property was an integral part of a passageway for what became the Via Francigena, connecting Rome to northern Europe. Located in the center of Tuscany, on the highest hill of the estate called “Toiana Vecchio”, it gave those passing through a clear 360 view of all the provinces from Tuscany.

Within the existing property, the castle built during the 6th century had a church dedicated to the Archangel Michael which was an important stop for pilgrims on their way to Rome. The estate is located on the St Michael’s line, serving to connect various monasteries dedicated to the Archangel Michael in Europe and the Middle East.  A few centuries later the estate would be known as “Tenuta San Michele”.

The castle was owned by many Italian families, including Conte Ugolino Della Gheraldesca who is mentioned in Dante’s “Divine Comedy”. On various occasions throughout this period, all the Princes of Tuscany met at the castle to renegotiate the peace between them.

In 1364, Florence conquered the castle of Toiano and since then, the bell of the castle known as La Toianella has stood in Palazzo Vecchio, symbolizing the victory over the Pisans. For centuries agricultural activities, including the farming of olives for oil and grapes for wine have existed on the property. Today’s buildings; Renacchi and Stento used to be farmhouses and were both built over 300 years ago.

In the late 18th Century the castle was destroyed by an earthquake. Shortly after, most of the stones from the ruins were used to build the now existing Villa as well as the building next to it, Fattoria. Today on the hill of Toiano Vecchio, situated at the center of the property, it is still possible to see the few stones remaining from the castle in its original location.

The family that built the Villa in the early 19th century owned it until 1931. Numerous property ownerships followed throughout the decade but the current owners bought the “Tenuta San Michele” in 2007 in a state of extensive disrepair. Art world professional, Lena Evstafieva, musician and producer, Jérôme Hadey and Parisian entrepreneur and nightclub owner, Lionel Bensemoun combined their respective skills and knowledge to redevelop the property and founded Villa Lena Agriturismo and Art Foundation which is now a sought after destination and a source of inspiration for all.

What’s On at Villa Lena

Truffle hunting is one of the most anticipated Autumn activities at Villa Lena. Much of Villa Lena’s 500 hectares estate is sunlit dappled woodland teeming with life, including wild boars and of course the forest’s diamonds- tartufi bianchi.

These ancient woodlands of Palaia that surround the hilltop Villa are the setting for the Truffle hunt. An experience that is not only beautiful, but takes you to the heart of an important autumnal tradition in Tuscany, and joining the ‘silent hunt’ means that you are not only searching for some of the best white truffles in Tuscany, but doing so with the most sincere respect for nature.

Villa Lena will host guests for traditional truffle hunts helmed by the highly skilled agriculture team and Lagotto Romagnola dogs. There will also be the opportunity to experience fresh truffles in the best possible way; finely shaved over homemade Tuscan pasta, accompanied by a glass of Villa Lena’s own sparkling rosé.

This October, Villa Lena will host a creative retreat that celebrates autumnal glory, nature and botany. This 5-day Tuscan adventure offers the chance for guests to immerse themselves in a retreat that bridges the gap between art and nature. Retreat goers are invited to experience the poetic aesthetic of botany, the joy of natural perfume and exploring the art of foraged ceramics with workshops led by Evalie Wagner, Merle Bergers of Lingua Planta and Abbie Adams.

Guests will be housed in Villa Lena’s luxury rooms that offer breathtaking views of the Tuscan hills. Within the program of events there will be plenty of space to explore and enjoy some time to yourself and the facilities Villa Lena has to offer, including a heated pool and tranquil yoga studio.

This October half-term, Villa Lena presents the perfect destination for families to escape into the Tuscan Hills.  For the third year in a row, Villa Lena is teaming up with Oppidan Education and their tutors for a unique program of inspiring, dynamic and educational activities for children of all ages, leaving plenty of time for parents to relax and unwind.

Oppidan is a UK-based mentoring company that creates an exciting and educational camp for kids of all ages, in line with Oppidan’s main goal to take learning outside the classroom, with each day providing a unique program of games, challenges, and mentoring. Apart from the group activities, one-on-one tutoring will be available if a little confidence boost is necessary before returning to school. Creativity is at the heart of Villa Lena, with families being offered a unique, dynamic, and sun-filled autumnal holiday experience.

Villa Lena will embrace the spooky season with a thrilling and magical week planned at the Tuscan estate. Guests are invited to discover the Medieval origins of Toiano and the legends around San Michele. Activities during Halloween week include a spooky treasure hunt among Villa Lena’s extensive art collection, plus a dragon-themed ceramics workshop with artist in residence, Abbie Adams, followed by a fire pit ceremony.

Villa Lena’s Yogi in residence, Madeleine Auvinen, will provide manifestation workshops and oracle readings for a real paranormal experience. For the kids, there will be family pumpkin carving, plus adventurous activities such as a Dragon Egg Hunt organized by Oppidan Education Camp.

Guests will also be invited to travel to the past and taste the authentic delicacies by joining the ‘Medieval Feast’ on the eve of the 29th at Villa Lena’s destination restaurant, Osteria San Michele which will be followed by a ‘Lunch on Fire’ on the 30th, set by the Front Villa with a magical bonfire and a DJ set to close the season in style.

For bookings and further information on the above, visit villa-lena.it.

Love Italy and want more? Click here for 24 Hours in Florence and click here for one of our favourite Italian Old World Cities, Turin.