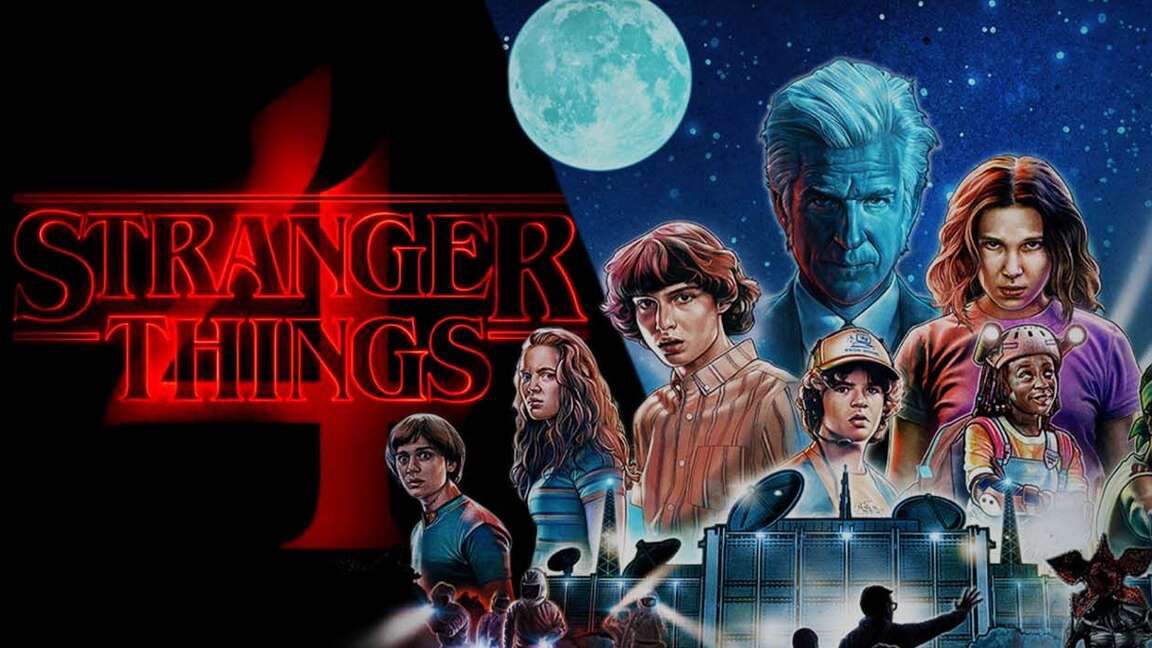 More gore, more guts and the kids are all grown up. We review Stranger Things Season 4.

The Stranger Things team are back and this season they are bringing a new level of thrills. What was originally a supernatural thriller is verging into sci-fi horror this season, with enough 1980s references to fill the Hawkins laboratory.

When we re-enter the world of Stranger Things, the crew are split across the globe, with Joyce, Will, Jonathan and Eleven relocated to California. Will and El are at their new school, El is struggling to fit in and facing some serious bullying from Californian blonde babe, Angela (Elodie Grace Orkin) and her nasty crew (don’t worry she eventually gets her comeuppance as all good bullies should!).

Back in Hawkins the rest of the boys are back, looking well advanced for their teenage years – hello Mike (Finn Wolfhard) who is clearly not 16! Lucas (Caleb McLaughlin) is trying his best to fit in with the cool crowd by joining the school basketball team. Max (Sadie Sink) is struggling with the aftermath Billie’s (Dacre Montgomery) death, and so are we to be honest, one of our all time fave ST characters! and Dustin (Caleb Matarazzo) is being, well Dustin. The boys have joined The Hellfire Club, a Dungeons and Dragons nerd fest, led by enigmatic dungeon master Eddie (Joseph Quinn), in all his ‘Billy Idol in Labyrinth‘ hair glory.

Steve (Joe Keery) and Robin’s (Maya Hawke) chemistry and banter is still on point as they work in the local video store and prepare for a battle they don’t know is heading their way. As for Hopper, we find out he survived and is imprisoned somewhere in the wilds of snowy Russia but how he re-enters the scene is yours to be discovered.

The gore is definitely upped this season so don’t expect a nostalgic 80s light entry to the 4th season, expect to get hit with a new level of evil, as soon as the opening minutes of Episode 1 roll.

The 80s vibes are totally alive and well, from Joyce’s new job as a Encyclopaedia Britannica sales rep to Kate Bush’s Running up that Hill (A Deal with God) taking centre stage as a new theme song of the season and now a new anthem for self-obsessed TikTok teens across the globe. (Get the full Stranger Things 4 playlist here).

The season is split in two with the first seven episodes (Volume 1) having dropped in May and Volume 2 dropping on 1 July. This is the penultimate season of Stranger Things so expect a set up for the biggest battle of the teens lives in the final season.

The latest Upside Down villain in this season, Vecna, is more everything – more evil, more ugly and well, more down right scary, conjuring up classic 80s cult bad guys. Word of warning this is not a kids show! Much like Euphoria, being a teen in Hawkins is a difficult place to be!

We won’t ruin your fun with spoilers in this article but what we can say is that Episode 4 is the best 79 minutes of television we have seen in a long time.

We can’t wait to see what the Duffer twin brothers come up for Volume 2 of Season 4 and Season 5 of Stranger Things, which will be the last for the series.

Who will survive? Who will perish? Will Nancy and Steve get back together? Will Eleven regain her powers and save the world? Will Mike look 25 by next season? Who knows? What we do know is you’ll have a rollickingly good, albeit scary, time finding out. Get on and stream it here now.

1980’s pop culture fans, supernatural and sci-fi fans and anyone with a penchant for excellent writing, acting and special effects.

Want more? Check out what else we are watching here.