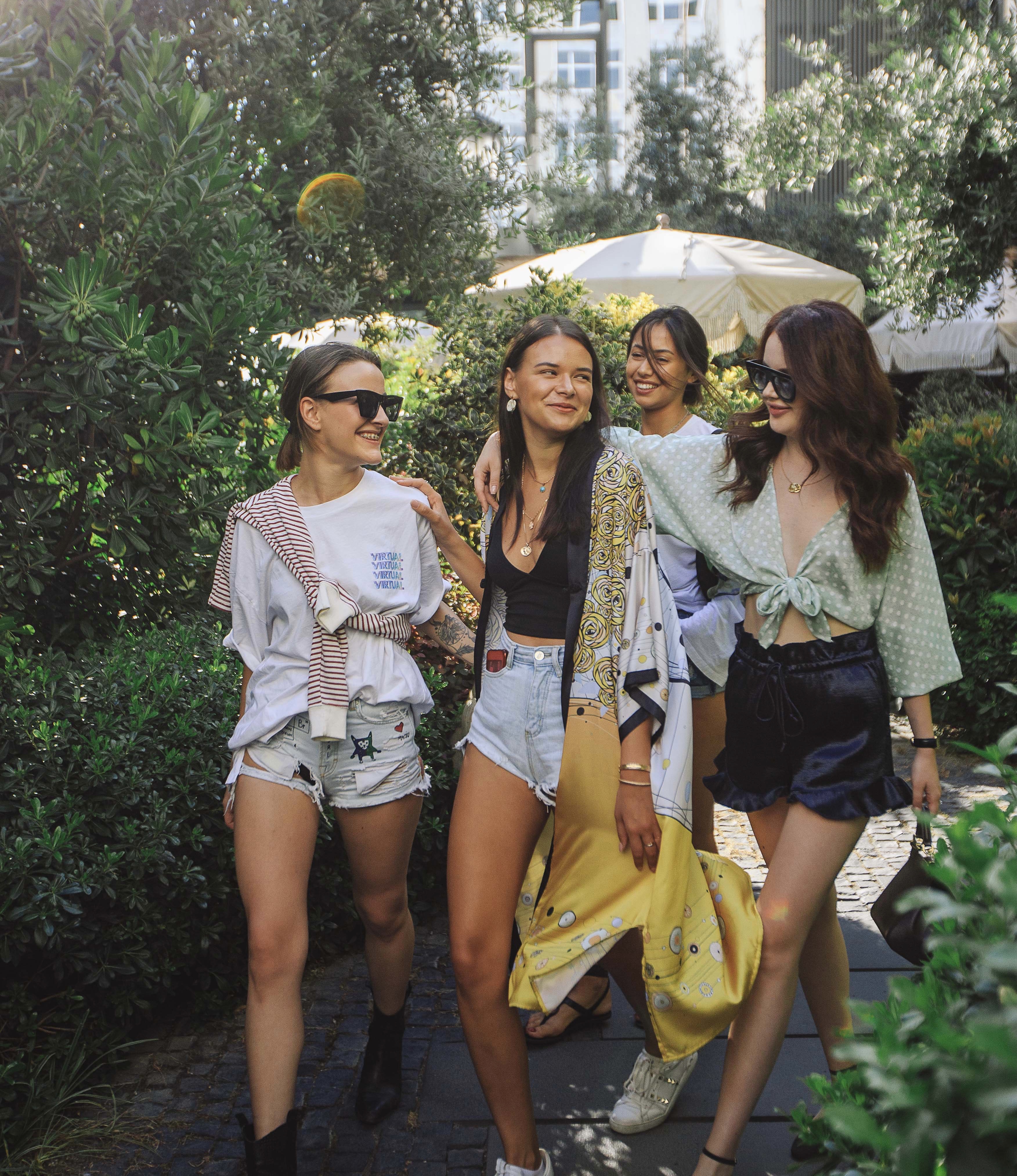 Every region of Sydney inspires a unique dress code, lifestyle, and real estate price point. The North Shore is notorious for its ‘la-di-da’ way of living, the inner-west for its alternative scene, and the Northern Beaches for the diverse range of milks on offer at the many eco-friendly cafes.

Of course these are all just generalisations, but to celebrate Sydney’s variety of regions sporting strong diversity in culture and lifestyle, we’ve rounded up a tongue in cheek look at the imaginary (yet totally relatable!) guide to how Sydneysiders spend their weekends.

Bio: The Northern Beaches girl (let’s name her Louise) enjoys waking up to her picturesque view each morning before strolling down the stairs to level one (kitchen) for her almond latte – sponsored by Nespresso.

After taking the dog for a walk around the park facetiming Annie about tonight’s plans, Louise will get her nails done: full-set acrylic.

After hitting up The Ivanhoe in Manly for a few rounds of mojitos, she’ll bump into a group of people she sort of knew in high school, making small talk about which uni she graduated from and what her new marketing assistant role has been like.

She’ll regretfully grab a kebab on her way home after a few too many daiquiris – Karmen shouted a few rounds thanks to her promotion – and will fall asleep with a facemask on.

Fashion: Louise will mindlessly scroll through Princess Polly and White Fox just a little too often during the boring moments of her work day, but will usually opt for something simple and elegant from Mura (or anything off-white, tan or beige).

Pet: An American Staffy on their left-side (and a good-looking boyfriend on their right).

Their latest gossip: Her best friend Jacqueline (an Instagram influencer) has been named and shamed for accidentally tagging the wrong brands in her fashion posts.

Bio: Natasha will begin her Saturday going through her social media apps whilst drinking an organic tea (local brand, of course) in the garden with her sister – they aren’t on speaking terms though because she didn’t comment on her last Instagram post.

After a bottomless brunch with old high school girlfriends at The Fernery in Mosman, Natasha and her group will drunkenly invite themselves over to a house gathering hosted by a guy that two of the girls are secretly fighting over.

After sobering up thanks to two hours of KIIS 106.5 playing in the background – and a huge order of I Love Pizza – Natasha will make her way home via Uber to either play Sims or watch repeats of Friends on Netflix (her two guilty pleasures on a Saturday night after an afternoon of day drinking).

Fashion: Natasha has always had a thing for Glassons when it comes to staple pieces, but will fork out on SHEIKE for more special occasions like the races or a friend’s birthday. Lululemon also never seems to get old.

Pet: She will post three social media stories a week (minimum) of her big fur friend Lulu the labrador.

Their latest gossip: She and her BFF Karina got matching star sign tattoos last week, but their other friend Samantha didn’t get the memo and will feel completely excluded when she finds out!

Bio: Eastern Suburbs gal Natasha will start her weekend teaching a community yoga class at 5am on the sands of Bronte Beach.

After a cappuccino – sans chocolate, she just loves the extra foam – with her group of earlybird yoga enthusiasts, she’ll do the Bronte to Bondi walk to get back to her flat for a solo pottery sesh accompanied by a low-carb salad.

When the early afternoon crawls in, her boyfriend of five years – Ben – will bring over his guitar to play acoustics (in her front yard hammock) while he waits for her to get ready for their social event.

When they arrive at the live music gig at Public Bar, their friends – a mix of men and women who look a lot like different versions of Angus and Julia Stone – will greet them with a single kiss on the cheek followed by beautiful white smiles (probably veneers) and some deep conversation surrounding music.

The night ends with incense, candles and slow sex for Natasha and Ben, who are excited for their Sunday morning sleep in – alarm set for 5am.

Fashion: The Bondi markets and luxury boutique stores across the East are usually what Natasha will head for when looking for a new denim jacket or linen dress.

Pet: Her Great Dane and Persian cat somehow get along very well.

Their latest gossip: Her beautiful friends Rosie and Khan are splitting up, but it’s very amicable and everyone wishes them the best.

Bio: Lizzie will wake up late morning to her pineapple ice vape and a black coffee while reading a chapter from the gothic-romance novel she’s currently reading – her many housemates most likely joining her.

As a collective – or as they call themselves ‘family’ – they’ll blast the record player (think: Led Zeppelin, The Doors or Foo Fighters) and do a clothes swap in the living room.

After a few hours of chilling out and playing pool (with their vegan spring rolls and dumplings) Lizzie will remind everyone they need to start getting ready for their night out. They walk as a group sporting different hairstyles and colours, almost like a quirky version of the power rangers squad.

When they arrive at their friend’s housewarming party, they’ll dance the night away till early hours of the morning.

Most of their evenings will include disposable camera shoots, deep conversations surrounding politics, and a few spontaneous moments of friends playing the saxophone or other jazz instruments laying around the home.

Pet: She loves her cat Tigerlily and her snake Fred. Fred is technically her ex-boyfriend’s, but they’re amicable so they’ve settled on a friendly settlement where they swap over weekly taking care of him.

Their latest gossip: Gibbo, Lars and Emerald are seeing if they can make it as a thrupple. So far, it’s going well.

Bio: Jasmine is waking up especially early this Saturday for Bec’s engagement party plans. They begin celebrations with a group facial and massage at Parramatta’s best spa, followed by a champagne breakfast at Gatehouse Tea Rooms.

After lots of laughs and loud jokes swimming across the table, the group of ladies head off to prepare the bride-to-be’s home for the engagement party.

Jasmine’s boyfriend and his friends (who are all going out with her girlfriends) arrive once everything’s been set up, and they dance around with Bec’s family and other friends the entire evening.

The luxury cake and perfectly presented nibbles are being handed out by Bec’s young cousins who are wearing matching Louis Vuitton – thanks to the grandparents.

OFashion: Jasmine has a big soft spot for anything designer – her favourites are Louis Vuitton and Coach.

Pet: There’s not a day that goes by without a cuddle with her labradoodle, Mila.

Their latest gossip: Her boyfriend of five years was spotted on Tinder… WTF!?