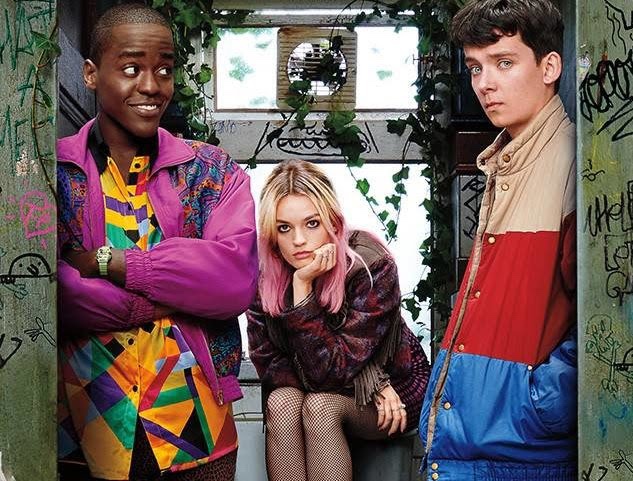 Let’s face it, whether by choice or necessity it is likely that many of us around the world will have a little more time at home than we anticipated in the coming weeks and months. Of course this presents a range of opportunities, you could start that novel you were always going to write, take up painting, learn to speak French via an app or, like 99% of the population, you could just stay in and binge watch Netflix. Here are five shows currently on our list for a marathon binge session, quarantined or not.

Every every actor performs brilliantly, from the tortured Adam played by Connor Swindells, the wonderful Emma Mackey as Maeve, awkward but endearing Otis played by Asa Butterfield and newcomer standout Ncuti Gatwa (Eric). Gillian Anderson’s performance as Otis’ sex therapist mother is a excellent, creating a generation of new fans too young to remember X-files. What underlies this film however, is a the classic ‘boy meets girl’ love story that’s as compelling now as it has always been. If you are a parent of teens it’s well worth a watch, a quick scout around the teenagers in our life tells us that most of them have watched it and are finding it very useful to supplement the largely vanilla school-run sex education programs.

One of the most interesting things about this show, for us anyway, is the way it manages through costume and set design to give off an aura of being set decades ago even though it is very much set in the modern day. Technology takes a back seat to dialogue and the problems faced by the teens as they navigate through their last year of school are as old as the dawn of time.

Fashion lovers, here is your chance to see more of the wonderfully stylish and watchable Tan France (Queer Eye), and British Fashion Royalty Alexa Chung, as they search for the next top fashion designer. While it strikes the perfect balance between serious and not so serious, the one thing it is completely serious about is the fashion.

The contestants aren’t your run of the mill ‘picked off the street’ types, they come from across the world and are a talented bunch, some having ghost designed for famous designers and many with their own labels already. With a $250,000 prize on the line and the chance to be sold through Net-a-Porter the stakes are high. Alexa and Tan are accompanied by a host of industry guest judges, including Tommy Hilfiger and Phillip Lim, though it is Alexa and Tan themselves that really make this show. If you’re a fashion designer, a creative or simply love the whole world of fashion this show is for you.

Jane Fonda and Lily Tomlin in a comedy together? Enough said really but when you add an excellent supporting cast, witty dialogue and just the right dose of drama you have a highly binge-able show on your hands. The original premise for Grace and Frankie, now six seasons in, was about two women coming to terms with the fact that their husbands had left them for each other, however what the show has really always been about is female friendship and navigating singledom in the later stages of life. Chalk and cheese, watching Grace (Jane Fonda) and Frankie (Lily Tomlin) rub together is the true delight of this series, oh and their wonderful Californian house by the sea.

Fans of the Bachelor, Married at First Sight or any other reality dating show will love this Netflix originals date fest with a twist. Contestants speed date for ten days without actually seeing each other, taking away the ability to judge one another on looks alone.

Like most good reality shows it is simple, easy watching that sucks you in, with just the right amount of drama to keep you entertained and enough belief in itself that love can conquer all. There is no pretending that this TV show deals with life’s big issues but sometimes, particularly at times like these, pure reality escapism is exactly what the doctor ordered.

The premise of this series is its biggest selling point, the one politician left alive after the Capital is bombed during the State of the Union address, the Designated Survivor, becomes President of the United States. Housing and Urban Development Secretary, Thomas Kirkman (Keifer Sutherland), is the man of the hour when his life is thrown in to a tailspin as he assumes the Presidency, unprepared and unqualified. What follows is Kirkman and his merry band of advisors tackling a whole range of current issues – terrorism, errant dictators, pandemics (eek!) which mirror much of what is happening across the world today.

We are a little in love with the wonderful Maggie Q, who plays FBI agent Hannah Wells, whose tough girl cool we can’t get enough of. Though there is some criticism that the show tails off after Season 1 as it moves in to a true White House political drama, by then you will have likely invested in the characters and, like us, be rooting for good guy Kirkman to make it through, morals intact, to the bitter end.

2 comments on “Five Shows To Binge Watch On Netflix Now”