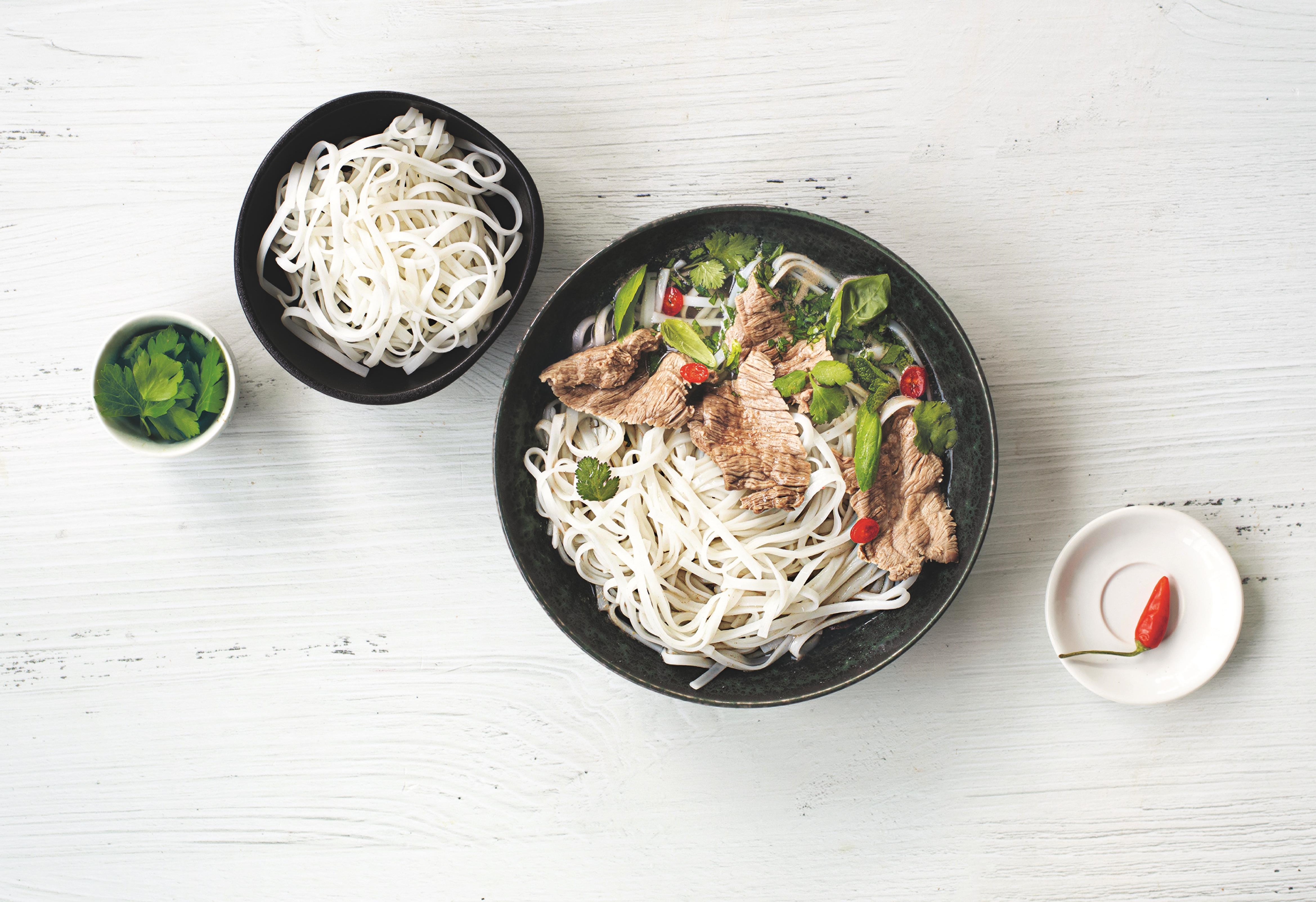 Pho is a traditional Vietnamese noodle, beef, and vegetable soup that has become popular all over the world. In Vietnam, you can choose various cuts of beef for the recipe: brisket, shin, stewing beef, tendons, or tripe.

Pho can be served topped with various fresh garnishes such as chilies, scallions (spring onions), onions, and bean sprouts, and is accompanied by lime wedges or sauces such as Sriracha or fish sauce.

In a large pot, combine the beef bones, beef, 2 quarts (1.9 liters) water, the onions, parsley, ginger, star anise, and peppercorns. Bring to a boil over high heat, then reduce to a simmer and cook for 2 hours, skimming any foam from the surface with a skimmer. Add the fine sea salt and simmer for 1 hour longer.

Pull out the meat and bones. Discard the bones and cut the meat into very thin slices. Strain the broth into a clean pot (discard the solids) and stir in half of the chopped herbs.

In a saucepan of boiling salted water, cook the noodles until tender, about 5 minutes. Drain well.

Add the sliced meat to the broth and reheat. Add the noodles and chilies and sprinkle some coarse salt over the meat. Serve hot, garnished with the remaining herbs.

There are classics of gluten-free international cuisine—such as Creole Jambalaya from the United States, Salmon Sushi Rolls from Japan, and Corn Roti from India, as well as many lesser-known regional specialties, including Injera from Ethiopia, Yuca Skillet Cake from Bolivia, and Farinata from Italy.

Beautiful, bright and enticing photography specially commissioned for the book showcases meals containing colorful vegetables, fish, meats and sauces, while gorgeous original illustrations open every chapter. Each recipe is identified with its country of origin and accompanied by a short introduction describing the dish’s history, its place in the cuisine of a region, or advice on regional ingredients or cooking techniques. Recipe icons indicate whether dishes are Vegan, Vegetarian, Dairy-free, Nut-free, can be prepared in 30 minutes or less, and use 5 or fewer ingredients.