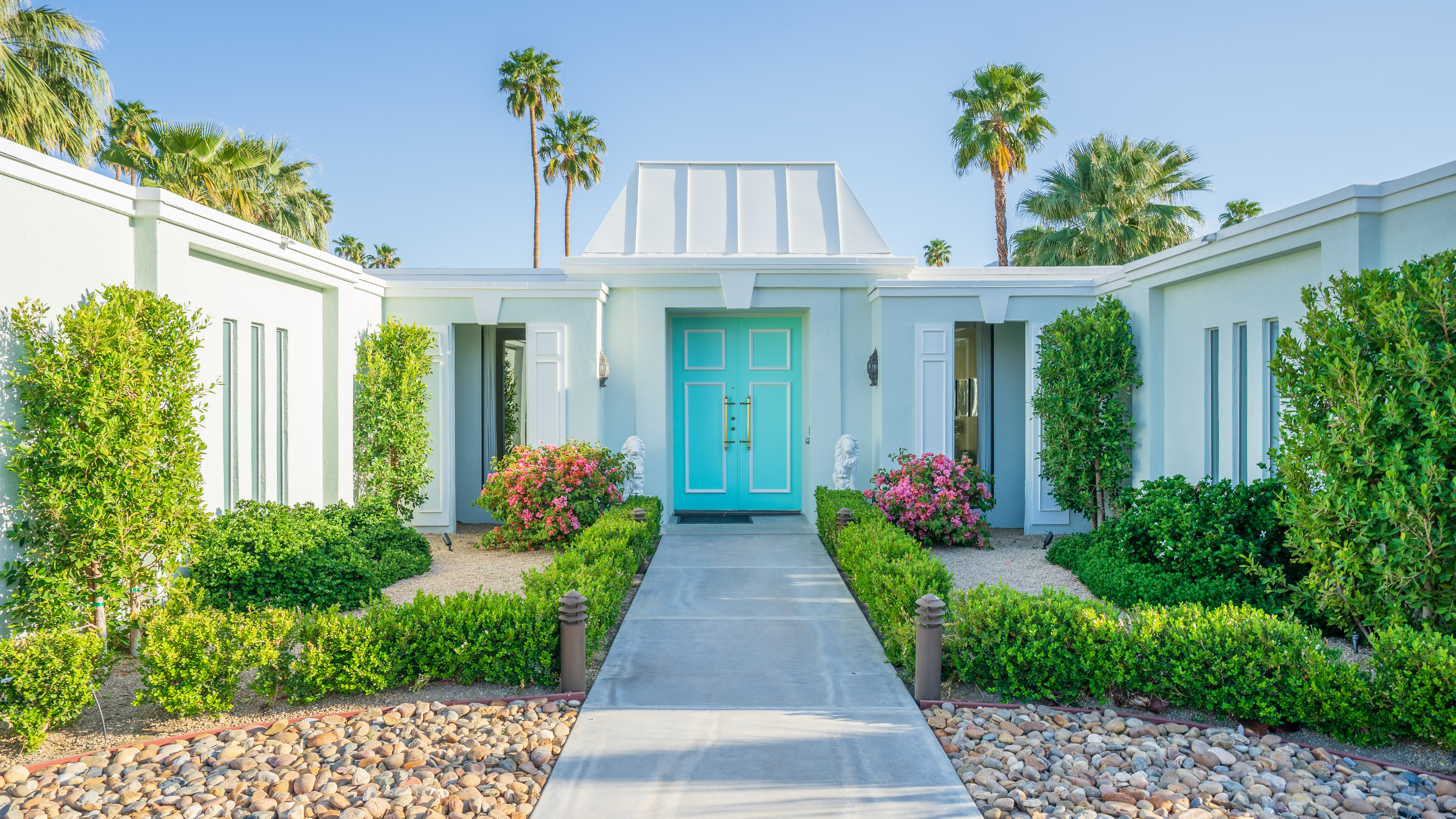 Olivia Wilde’s utopian film Don’t Worry Darling hasn’t been without its controversy and you would be hard pressed to read any article that isn’t more about the gossip and drama surrounding the stars than the film itself. However as our regular readers know, here at ele we are committed to avoiding celeb gossip and are way more focused on the things that make life beautiful!

The real star of the show in this film is the region of Greater Palm Springs in California. A unique desert oasis, globally famed for its mid-century modern architecture that sits surreally in a landscape of mountains and palm trees.

We round up some of the iconic filming locations form Don’t Worry Darling in Palm Springs. And our ele tip? Don’t visit in mid summer- we did once and wow it was so hot we could hardly get out of the hotel but all other times of the year this special spot is simply a must-visit.

Playing the home of the Victory Project’s leader Frank (Chris Pine), this is one of the film’s star locations. Many mid-century modern experts rank Palm Springs’ Kaufmann House among the most important American houses of the 20th century. Even though you can only peer at this spectacular private residence from the end of its driveway, its design aesthetic is undeniable.

In 1946, architect Richard Neutra created this stunning blending of steel, glass, and Utah stone as a desert getaway for Edgar J. Kaufmann Sr., a Pittsburgh department-store magnate and architecture connoisseur.

The home remains one of Neutra’s most famous residential works (out of more than 300 homes he designed) and a featured stop on every Palm Springs architecture tour. Take a peek by driving by 470 West Vista Chino.

While Frank (Chris Pine) lives in the Kaufmann House, Jack (Harry Styles) and Alice (Florence Pugh) are in the environs of Azul Circus in the Canyon View Estates, a community of condominiums in the city’s South End.

Built in the 1960s by architects Dan Palmer and William Krisel, these clusters of villas sit around a shared pool, spa, and green space. The embodiment of upmarket suburban living, they have floor-to-ceiling windows, stone fronts, and the geometric-patterned concrete blocks that are a trademark of Palm Springs.

The plaque outside this concrete stunner reads like a Dream Team of mid-century modern design: Swiss-born master Albert Frey, E. Stewart Williams, Robson Chambers, and John Porter Clark all had a hand in creating the building’s signature style.

One of the most influential elements was the creation of a screen wall at the front of the building. Made of metal tubing cut at angles and stacked in rows, the wall acts as a visually arresting shield against the desert region’s intense morning sun. Another eye-catching element is the portico overhang with its large central opening that allows a handful of palms to grow through.

Located in a historic Albert Frey designed building, the Visitors Center is representative of Palm Springs’ wealth of mid-century modern architecture, and offers information and assistance on where to stay, play, dine and shop.

This featured building was originally a gas station, constructed in 1965 for Esso. Its extraordinary wing-shaped roof grabbed the attention of visitors as they entered the city from the north, with Mount San Jacinto looming behind. Its change of use came only in the 1990s, when it was converted into an art gallery and was then taken over by the Palm Springs Bureau of Tourism.

Arriving at the climax of the movie’s trailer and the building that stands in as the Victory Project’s mysterious headquarters, the Volcano House truly belongs in the world of Don’t Worry Darling.

In the trailer we see just beyond the eerie dunes that make up the Mojave Desert’s Devils Playground, a glaringly white dome rises up out of the ground. Alice and an army of red-clad Project workers ascend the mountain, as well as the circular road that leads to the 2,200 square foot house designed in 1968 by architect Harold James Bissner Jr.

For this location, the crew ventured a couple of hours north of Greater Palm Springs to the Mojave Desert community of Newberry Springs. There, atop a 150-foot cinder cone, sits the iconic Volcano House, a saucer-like structure that appears to have materialized from another planet or dimension.

Not only did Olivia Wilde shoot scenes for Don’t Worry Darling at the La Quinta Resort & Club, but the cast and crew stayed here!

Set against the breathtaking backdrop of the rugged Santa Rosa Mountains, the legendary La Quinta Resort & Club is the longest-running resort in the Palm Springs desert area and one of only two resorts in the country for which a city has been named. Spanning 45 vibrant acres, its’ verdant grounds are accentuated by beds of colourful flowers; fragrant orange, lemon, tangerine, tangelo and grapefruit trees; cypress trees and cacti; sparkling pools and picturesque courtyards, all framed by towering palms.

Want more? Click here for California Cool Interiors – How To Get The Look In Your Home and here for ele Home & Interiors: The Bay Beachhouse.