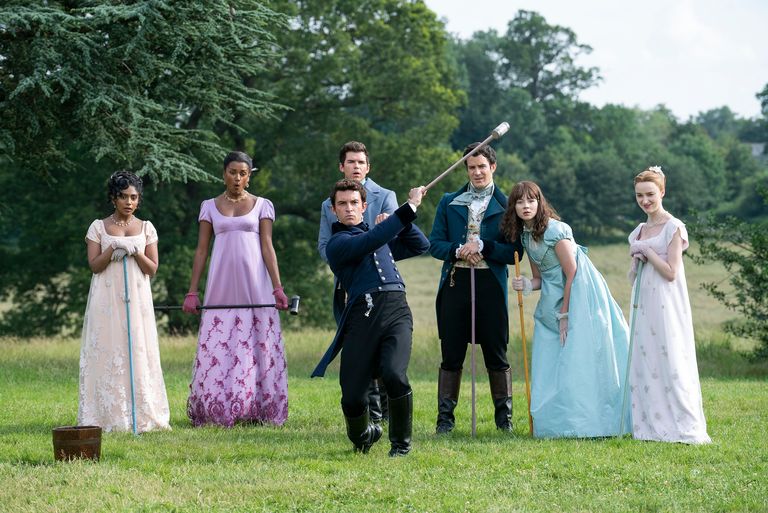 It is one of the most hotly anticipated second seasons of a Netflix original series, but does Bridgerton Season 2 live up to the first series? Let’s find out.

The second season of Bridgerton was always going to be a tough follow up to Season 1, with its steamy love scenes and Rege-Jean Page’s handsome Duke of Hastings, it hit all the right notes. The world was mid-pandemic, at home in sweats making sourdough and the pure escapism in to a world of love and beautiful gowns was what we all needed.

And deliver it did – the glamour and glitz of regency London, the witty dialogue akin to a Jane Austen novel and the steaminess of Fifty Shades. Audiences lapped it up and it became one of steaming giant Netflix’s most watched series.

As soon as we heard it had been renewed for Season 2, we have been hotly anticipating the follow up which loosely follows the second book in series. For fans of Julia Quinn’s novels the second book ‘The Viscount Who Loved Me‘ is often seen as one of the best so there were high hopes for this season of the Netflix series.

The second season takes a more gentler pace and has a little less of the steam that Season 1 is so famous for (that stairs scene!). The story focuses on the eldest Bridgerton male, Viscount Anthony Bridgerton (Jonathan Bailey), and his quest for a wife during the London season. Entering the scene are sisters Kate (Simone Ashley) and Edwina (Charithra Chandran), who are there to secure Edwina a husband.

Inevitably a love triangle ensues with ‘spinster’ Kate (26 and unmarried, god forbid!) focused on ensuring that Edwina doesn’t end up in the clutches of the rakish Bridgerton heir. Kate and Anthony however cannot deny their simmering tensions wrapped up in scathing dislike (Kate for Anthony) and during much of the series the tension between them is at boiling point.

Much loved characters from season 1 remain, including Penelope (the delightful Nicola Coughlin), Eloise (Claudine Jessie), whose character has evolved to a new level of self-righteousness and Lady Danbury (Anjoa Andoh) and Lady Bridgerton (Ruth Gemmell), whose friendship is just so watchable.

Of course, Lady Whistledown (narrated by Julie Andrews) provides the voiceover and while viewers know of her identify, the Queen and her loyal subject are still trying to crack the mystery. Anthony’s much loved sister Daphne (Phoebe Dynevor), whose character was the main show in Season 1, makes a few appearances though this season however it is all about Anthony. (Spoiler alert – Rege-Jean Page does not make an appearance).

Season 2 is definitely lighter on the steam which has drawn some criticism from fans of Season 1, though the simmering tensions between the leads provide an undercurrent of smouldering longing. Simone Ashley is excellent as Kate, and we predict very big things for the actress to come.

Who Will Love It?

Fans of Season 1, anyone who loves period dramas and readers of Julia Quinn’s novels. While the series does stray from the novels at points it is still a very satisfying adaptation.

Want more? Click here for our review of Hotel Portofino and here for The Gilded Age.